The City of London Police are part of what makes The City so unique. With only about 9,000 residents, but about 400,000 people coming in to the Square Mile daily to work, they have to deal with a variety of demographic that sets them apart from any other police force. However, it should not be forgotten they are also a fully integral part of national policing and have the national lead on economic crime.

It’s important to emphasise that the overall levels of crime in The City are proportionally low.

These are the main areas the City of London Police focus on:

In talking with a Police source, it becomes apparent that Bishopsgate features high on the crime mapping for all of these categories.

So, the question begs, what can be done to lower crime in our area?

The Police work actively with Met forces and British Transport Police, to ensure there is “cross-border” cooperation, where criminals come into the area from surrounding Boroughs and those that use the Liverpool Street Station hub to gain easy access to and from the Square Mile. 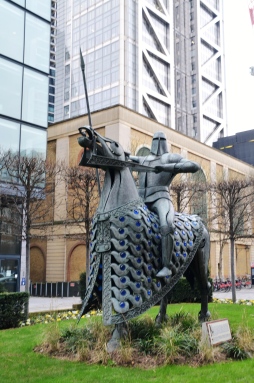 Bishopsgate has the highest number of police on The City streets. Deployment of officers is conducted in line with the current Intelligence picture, meaning that these valuable human resources can be used to best effect.

Their proactive approach is to use the following tactics:

Prevent: Work with businesses to put in measures to prevent repeat crimes.

Protect: Deploy policeofficers on the streets, the use of technology to map crime and attend those areas.

Pursue: Going after offenders and building up strategies to ensure a high prosecution rate.

In his annual report, Deputy Doug Barrow, Chairman of the Police Committee said, “Policing the Square Mile is not just the responsibility of the force, but all citizens. It requires partnerships between the Police and the people working together and that is exemplified by such initiatives as Project Griffin and the Crime Prevention Association.”

As part of my campaign, I want to see our environment improve. A big part of that is ensuring people feel physically safe, behave respectfully towards each other and be safe from fraudsters. The City of London Police are a key instrument that The Corporation has, to keep us safe. Working with them, as citizens, understanding their stresses and strains, is as important as putting these critical strategies in place.